Vaccination is one of the main strategies in the fight against infectious diseases. The protection provided can take many forms: protection against infection, against transmission of the pathogenic agent in case of infection, or even just against symptoms; permanent or temporary protection; total or partial protection depending on the effectiveness of the vaccine; vaccine easy to pack and administer, etc. Restrictions can also be social (vaccination adherence, vaccine accessibility) or financial. This last point is particularly important for farm animals that are bred for production and profitability. A breeder is interested in vaccinating his animals if their welfare is at stake and if the cost of vaccination is less than the cost of production and the expected welfare losses without vaccination. Knowing when it makes sense to vaccinate is a difficult question, the conditions required may vary according to the characteristics of the farms and over time according to the exposure to the risk of infection. 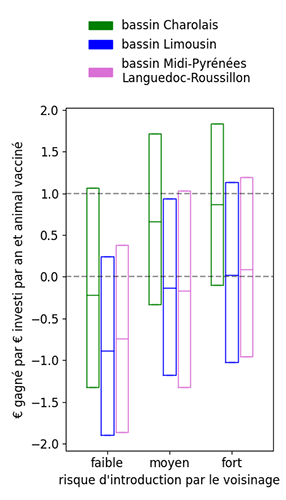 Image: return on investment after vaccination against BVD according to the cultivation system and the level of risk of introducing the virus into the neighborhood. The bars represent 80% of the values ​​obtained for each scenario repeated 1000 times, with the median in the middle. Results are variable as many events are random.

Within the Joint Research Unit BIOEPAR (INRAE-Oniris), and in partnership with GDS-Bourgogne-Franche-Comté (Burgogne-Franche-Comté health advocacy group) and the Institut de l’Élevage, scientists from the the DYNAMO team contributed to respond to this problem in the case of an endemic disease in cattle: the bovine viral diarrhea (or BVD). Despite numerous regional or national programs established to control this disease, the BVD virus still circulates, mainly in France, and causes significant economic losses for breeders, especially after its introduction into an unaffected herd. This virus is transmitted by contact between animals in the same herd or with neighboring herds, but it can also be introduced into the population by purchasing an infected animal. The priority animals to be vaccinated are breeding females, as the infection during pregnancy can give rise to the birth of persistently infected (PI) calves, which strongly excrete the virus throughout their lives and die prematurely. The period of greatest risk of introducing the virus into a herd will therefore be the period in which the pregnant cows are in the pasture, exposed to the risk of transmission from neighbors. The way of handling the herd influences the risk of introduction and circulation of the virus, depending on the concomitance between the breeding and grazing periods, as well as the existence or not of contact between cows (at risk of infection) and calves (among which finds most IPI).

A simulation model of the spread of BVD virus in a herd of suckler cattle was developed to assess the economic benefit of vaccination. It takes into account the characteristics of the infection (transmission rate, abortions, mortality from IPI, etc.), vaccination (probabilities of protection against infection, against symptoms, etc.) and the rearing system (calving and grazing periods, number of females for breeding, weaning date, etc.). The influence of cropping system was tested considering three systems representing a large proportion of French dairy farms, grouped in three basins. Surprisingly, even with similar rearing systems (suckling herd with calving season on pasture), vaccination is economically attractive in the Charolais basin, but not in the Limousin basin and the Midi-Pyrénées Languedoc-Roussillon basin (figure). This result was observed regardless of the level of risk of virus introduction by the neighborhood. Work is ongoing to determine which crop system characteristics influence these observations. Given the advances in BVD eradication in France and the evolution of surveillance for serological screening in several regions, consideration should be given to the decline in overall prevalence and the risk of vaccination interference with screening.

This work highlights the importance of taking into account the specifics of each breeding system to choose whether to vaccinate or not. Counseling tools are offered by the DYNAMO team, built from these research models.